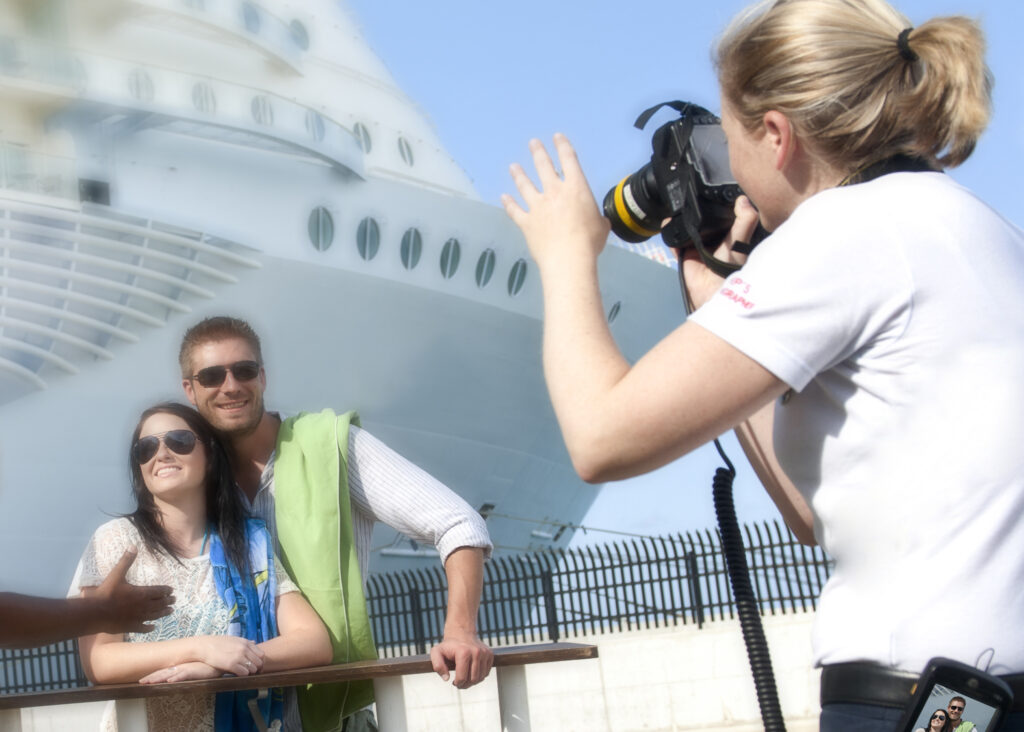 Image has been a long-term client of Halsys since the early 2000s.  At that time, Image were primarily using off-the-shelf photo software from Halsys but over time, we collaborated to customise the system for the specific needs of the Cruise industry. In 2012, we agreed on a long-term project to build a next generation software system which would allow Image to take ever greater advantage of digital technology.

Image started in the Cruise business in the mid-1980s and, at that time, the largest Cruise Ships were about 1,800 guests. Over time, the Cruise industry has grown the ships to take advantage of economies of scale and today the largest Cruise Ships have a guest capacity of over 6,000 guests. This upsizing occurred in an evolutionary way, over time and it allowed Image to work with its clients to provide specific technology solutions that drove innovation and maximized the guest experience. As Image was able to achieve these improvements, it allowed us to retain our existing Cruise line customers, as they grew their fleets with newer, larger ships and to win new cruise line customers as well.

When Image first started operations in the mid 1980’s, all photography was analog and film based. All photos taken in Image’s operations were printed speculatively and displayed in photo galleries. Guests would visit the photo gallery a number of times per Cruise, would locate their photos and then purchase the photo prints.

The majority of innovation was focused on product and photo gallery design. However, over time it became clear that digital technologies would become an important part of photo services on Cruise Ships. This change started with the use of digital cameras in some photo events and then grew when digital mini-lab printers were introduced. It soon became clear that specialist software was needed to manage these large-scale photo operations which can produce well over 50,000 images a week per ship.

In the mid 2000s, Image worked closely with one of our clients, Royal Caribbean International on improving the guest experience for RCI’s newest class of ships being introduced in 2010, the Oasis class which carried over 5,000 guests. Image introduced a number of technological improvements which were firsts in the Cruise industry including allowing guests to purchase their Cruise photos in digital format, for the first time.

In 2012, after Image had introduced these improvements, they looked at the technological landscape and realised they could move from a speculative photo model where all photos were printed to a digital on-demand model where photos would be produced in the format guests wanted at that time. However, to achieve this move to full digital display and production Image would need to use the latest development technologies which were more web centric. Image worked with Halsys on the photo workflow side of these solutions because of the in-depth knowledge our team had of high-volume photo workflow software systems and a thorough understanding of how Image worked as a business.

In 2014, Image introduced the first high volume, fully digital photo service system in the Cruise industry, on Quantum of the Seas for Royal Caribbean International. In September 2015, Image won the coveted Supplier of the Year award from the Seatrade organisation for this technology introduction.

By moving from the analogue speculative photo model to a digital on-demand one, Image achieved a number of benefits for their Cruise line clients and their guests. For Image’s Cruise line clients, the introduction of on-demand digital photo services meant an immediate and substantial reduction in the environmental waste created. Not only were Image not printing photos speculatively, but the team also moved to newer and more environmentally friendly commercial ink jet printers. In addition, the move to digital on-demand meant a very substantial reduction in photo gallery space requirements of at least 50% and in some cases 75%. For Cruise guests, the use of a digital on-demand photo system meant a wider range of product choices and much improved interaction with photo memories.

Working together to find the optimal software solution

To understand the specific elements, it is important to understand the high-level business processes involved. In Image’s business, providing photo services on Cruise Ships means multiple photo events could be occurring at the same time. With the largest ships having a team of about 25 photographers, it was not uncommon for 15 to 20 photo events to be occurring during one evening. The workflow system was tasked with specific processes including importing raw photos, providing automated and manual editing options, storing multiple copies of images to be used in different formats and the creation of various digital and print products. From a guest perspective, they expect and demand for there to be a seamless technology solution where they can view and purchase their Cruise photos quickly and in their chosen format and the iQ system provided this.

Since the first iQ photo systems were introduced in 2014, there has been continual investment and a long-term strategy of improvement and innovation. An example of this was the introduction of post Cruise digital photo delivery to guests, through an advanced cloud-based solution. This sounds easy until you realise you are dealing with very large business units which are continually moving around the oceans and require a different approach compared to land-based operations.

Where is Image now?

In early 2019, Image went through the process of a strategic business review and the result of this was the decision to step away from offering photographic services on Cruise Ships and focus instead on offering high volume photographic technology solutions to cruise companies.

Halsys continues to be involved in the long-term success of the iQ system technologies. These technologies are the most successful photo technologies used in the Cruise industry today and allow cruise companies flexibility in using the same software systems to operate a variety of business models, efficiently and with the highest levels of passenger satisfaction.

Some words from Brynley, Image…

“As the largest provider of photo services to the Cruise industry, Image has understood the power of innovation and using advanced digital solutions to provide the best guest experience and highest levels of service for our Cruise line clients. Halsys have played an essential role in helping Image create these technology solutions over a long period of product development and ongoing improvement.

Halsys have a deep understanding of commercial photo workflow requirements which is essential when working with high volume photo solutions and producing consistently high-quality images from various types of photo events. The team have always worked diligently to quickly understand Image’s overall needs and objectives and make sure these are taken into account in any development work provided.

Some words from Greg…

“Halsys began working with Image in 2002. In Image, we found an exciting partner which was always looking to innovate and in Halsys they found a capable partner to architect and develop the bedrock upon which their business could thrive.

In 2011, Halsys started developing a new generation of workflow for high volume photography called “Q Workflow”. This was a system of micro services designed to provide a high degree of automation with flexibility and scalability built in from the start. In 2012, TIG made the decision to transition to this new platform, and from this seed, Image’s iQ system was formed. Working more closely than ever with Image and their other partners over the years that followed, continuous innovations in iQ allowed Image to change the way Cruise photography operates.

Since Image stepped away from providing photographic services in 2019; Halsys continues to work closely with Cruise lines which are still using the iQ platform.”

If you’re interested in trying our service, please enter your email address and we’ll get back to you shortly